Recently one batch of 18 inch decanter centrifuges and mud agitators are ready for shipment to Offshore drilling company.

The decanter centrifuge with 4 lifting pads which meets the lifting requirement of offshore drilling company. The centrifuge pulley protection cover is painted with safety mark. The main motor and back drive motor comply with ATEX explosion proof standard for offshore used. The 18 inch decanter centrifuge model number is GNLW453, the bowl diameter is 18inch (450mm), bowl length is 61 inch (1540mm), the typical treating capacity is 264gpm (60m3/h) for drilling fluids. The max bowl speed is 3200rpm, the typical bowl speed is up to 2800rpm, the max G force is 2578G, typical G force is 1973G, the main motor is 55KW, the back drive motor is 22KW. The recommend feeding pump motor is 15KW. The mechanical separation cut point is 2 ~5 microns.

In order to meet with today faster drilling requirement, we keep improving the drilling fluids design including bigger capacity of decanter centrifuge, high capacity shaker with unique shaker screen design and streamlined process. Under this situation, GN displays a series of solids control equipment including shale shaker and decanter centrifuge.

GN drying Shakerwas designed with a two-motor system that can operate the linear motion mode, allowing the operator to tune the G-force down and up depending on the drilling fluids conditions. It provides operator flexible way to make the adjustments based on the condition and volume of drilling fluids across the shaker surface. The shaker can behandled with high G-force for highflow rate but can be turned down to a less vibrating mode for cutting solids flow and volume.GN shakers were recently deployed to many drilling site. 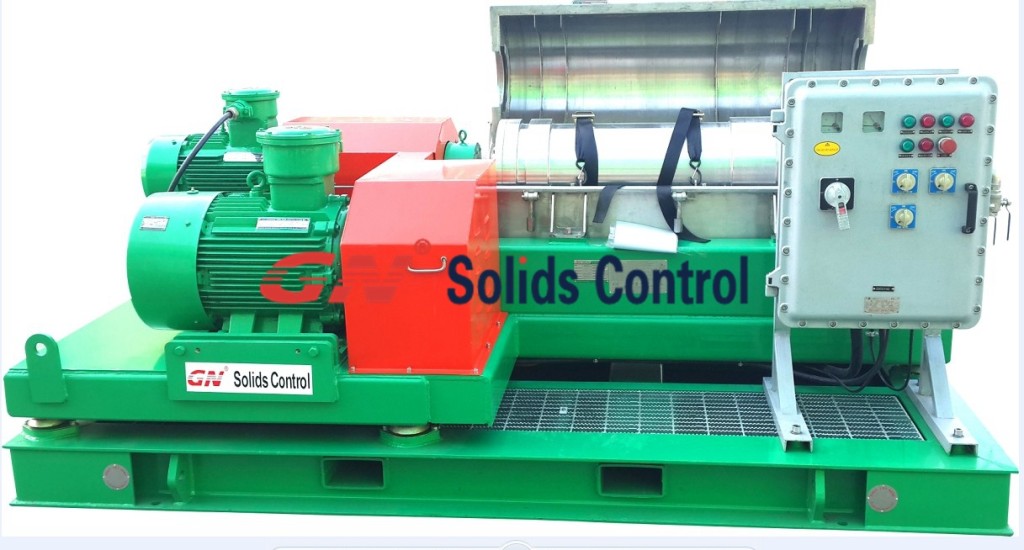 If you have any solids control issues, please feel free to contact with me.

Abu Dhabi Oil Show is one of the most important oil shows in world, GN Solids America, since its establishment by year 2007, has attended to this event for several times, always took with them the most popular equipments. Some GN customer got to know GN in Abu Dhabi and later visited GN company for further cooperation.

This year, for year 2014, GN also have a booth there, and this time, GN is planning to bring the most popular model GNLW363 Decanter Centrifuge, fixed speed decanter centrifuge with a high speed.

Comparing with VFD Control GNLW363, which shares same series model as the one for oil show, the fixed speed one has its common points and its own features.

They are in common in those features:

A shaker screen is easy to transport and installation. The fixed speed control panel is installed on same frame of the centrifuge. Comparing with the one with a VFD control panel, this one occupies less space.

If the site condition and mud composition is stable and operator clearly knows which speed is more frequently used, it is better for one to choose a fixed speeded model. It also saves the cost for purchasing and later maintenance.

GN Solids America has available several options for this model, and the one for the Abu Dhabi Oil Show will be on sale to customers with sea freight to Abu Dhabi free of charge.