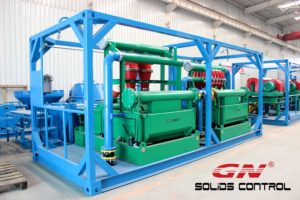 More attention should be given to the explosion proof of the motor and control cabinet, as it will be more dangerous if there is a fire on offshore rig or barge ship than on land rig. Thus, the electric components used for offshore should be strictly marin explosion proof standard. The other thing need to be given more attention is sufficient wear parts storage for offshore rig, as we known, it will be much difficult for the drilling to get a small wear part once the equipment shut down. That will be a waste for both time and funds.